Skip to navigation | Skip to content
Font scale A- A+

At the end of June, two members of Scouting achieved a milestone. Their journeys were very different, but the milestone was the same.

Antonin Demazy started his Scouting journey as a Cub Scout in Belgium. In time he rose to become Akela of the local Cub Pack. His world and country of residence changed as he moved to Australia with his family. But his Scouting didn't, as with three Scouting children, he became a Venturer Leader in Glen Iris. Along the way all four Demazy’s became scuba divers. In 2018 Antonin passed his exams as a Dive Master and joined the Scouts Victoria Scuba Team.

Phil Keech went through Cubs, Scouts and Venturers in Strathfieldsay, in country Victoria. At the 2012 Venture in Tasmania he qualified as an advanced open water diver. Phil even used his interest in scuba to help gain his Queen's Scout Award. He is currently a Cub Leader at Strathfieldsay, and after becoming a Dive Master with Scouts, is part of the Scouts Victoria Scuba Team.

After completing lots of dives and 10's of hours of e-learning, both Antonin and Phil enrolled to do a two week full time, intensive PADI (Professional Association of Diving Instructors) Development Course in Rye which culminated in two days of theory and practical exams. Keeping with the Scouting theme, their course was taught by Queen's Scout, Scout mum and PADI Course Director Kat Vcelka.

Left to right below - Phil, Antonin and Kat. 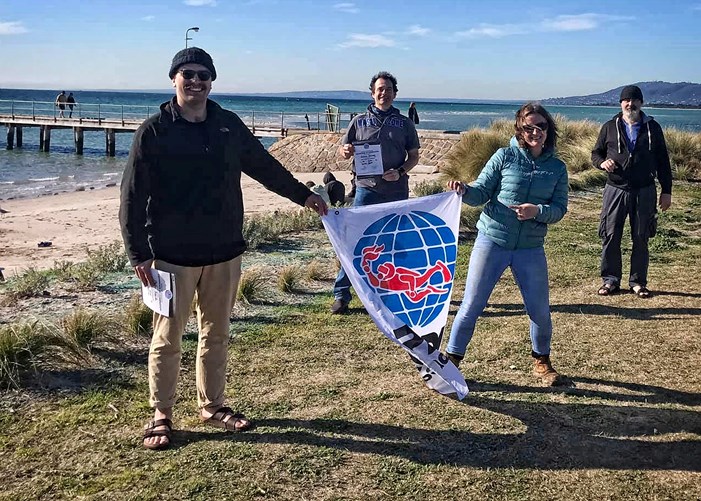 If you've got a question for Scouts Victoria, shoot us a message here.

Thank you for your enquiry. A Scouts Victoria representative will be in touch with you shortly.
Unable to submit request. Please try again.
News